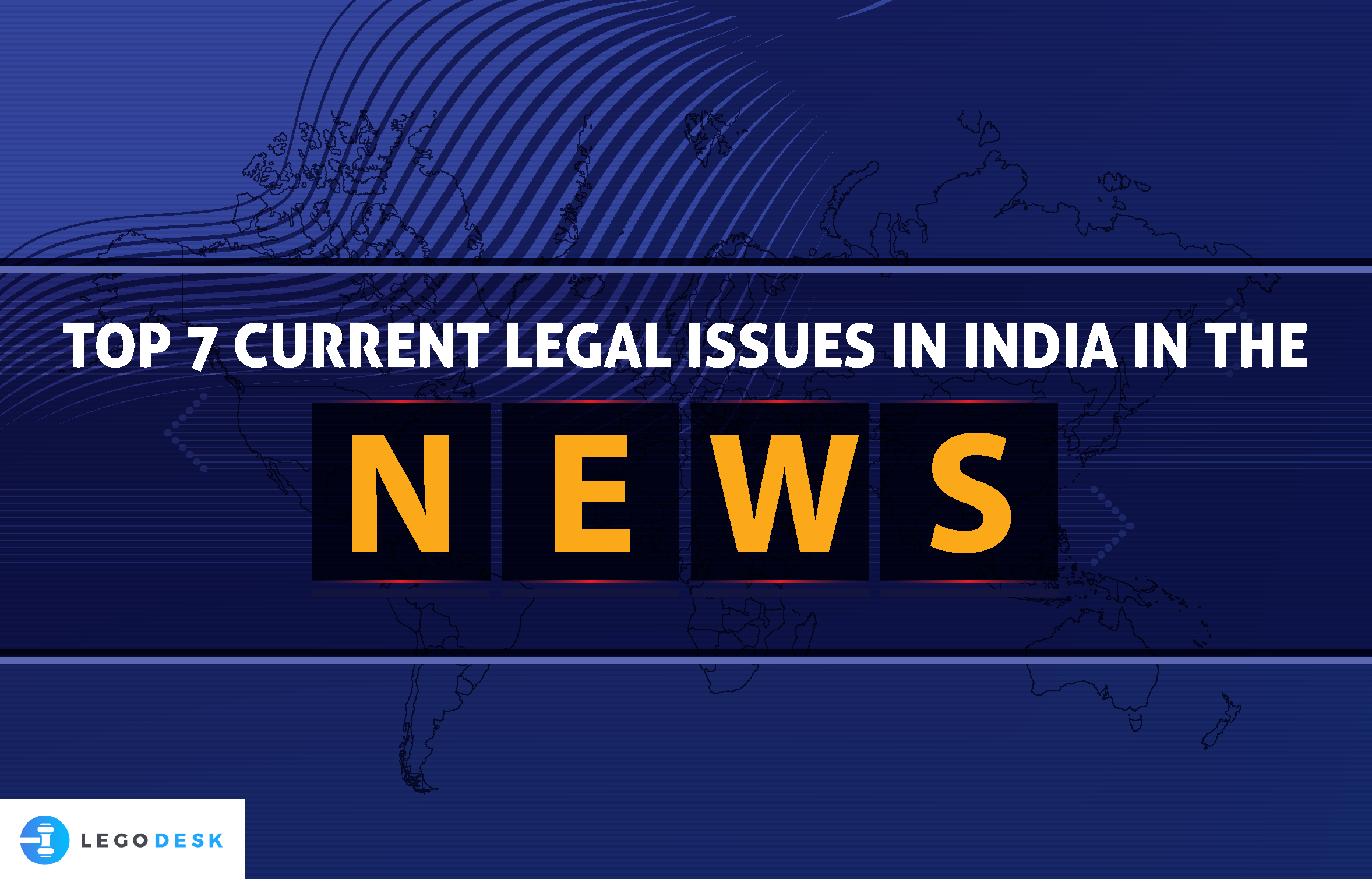 1. Ban on Chinese Apps in India:

This is one of the major current legal issues in India. The government banned 59 Chinese mobile applications to counter the threat posed by these applications to the country’s “sovereignty and security, “as per a press release shared by the Indian government in June 2020. Several popular apps such as TikTok, WeChat, Helo, ShareIT, Clubfactory, etc. were included in the list. The press release also mentioned that the applications are “prejudicial to sovereignty and integrity of India, defense of India, the security of the state and public order” by exposing sensitive user data to malicious third parties as per investigations conducted by the Indian Cyber Crime Coordination Centre.

Experts predict that with the ongoing Ladakh stand-off between the two countries and the bold move of banning Chinese originating apps, the diplomatic ties could suffer. However, tech start-ups across the country have rejoiced the news and plan on bringing more customers with aggressive marketing efforts.

However, the youth of the country as the exhaustive user base of the popular app TikTok is not happy and so are the Tibetans based in the country who used WeChat to connect with their families back home. Interestingly, a few of these apps have already been taken down from Google Play Store and Apple App Store.

Kulbhushan Jadhav, ex-Indian Navy officer, has refused to go for a review petition over his conviction, as per Pakistani officials working on his case. As per the Pakistan Additional Attorney General, Jadhav, who has received capital punishment in charges of espionage, has decided to his pending mercy plea instead. However, there are claims suggesting coercion.

Read Also – Top 10 Mobile Applications Every Lawyer Should Have

Interestingly, the International Court of Justice, in its July 2019 verdict, has ordered Pakistan to review Jadhav’s death sentence citing that Pakistan “deprived the Republic of India of the right to communicate with and have access to Mr Kulbhushan Sudhir Jadhav, to visit him in detention and to arrange for his legal representation”. Following this, India gained consular access to Jadhav in September 2019. As per the deadline set by Pakistani officials, Jadhav has time till July 20 to file an application petition against his conviction and sentence in the civilian High Court.

For a developing country like India, online learning is not possible due to an obvious lack of infrastructure and technology. Since the coronavirus crisis hit India earlier this year, students across the country have been struggling to carry on with their studies. Private institutes and state governments have been favoring online classes to proceed with this year’s academia. However, economically poor students are unable to join the classes conducted through any online platform. However, some of the elite institutions of the country such as IITs and IIMs want to conduct online classes and exams. Their decision has triggered an immediate backlash from large sections of their students, including the teachers’ association.

On the other hand, CBSE has reduced its syllabus by 30% for classes 9 to 12 while cancelling the 10th and 12th standard board exams. The students will be graded as per their last internal assessment exams.

Even after a series of talks meant to de-escalate the red flag situation in Ladakh, the standoff between India and China has entered its third month. In May, the standoff began as Chinese forces objected to road construction in the Galwan River valley. Consequently, a melee between the forces on June 15-16 resulted in the death of 20 Indian and 43 Chinese soldiers. Following this, there has been a fierce campaign to ban Chinese products in India.

Experts predict the skirmish to be the result of the development of Indian infrastructure in the Ladakh region, the growing relationship between India and the USA, and the revocation of the special status of Jammu and Kashmir by the Indian government in August 2019.

Although high-level quiet diplomacy between the countries continues to calm the situation, media reports suggest the ground situation remains disturbing. There are chances that the Chinese side will abide by current talks and start pulling back troops from the disputed region, the Indian forces continue to remain vigilant.

On March 2020, the RBI, financial regulatory body of India, placed a moratorium on the Yes bank. The RBI cited the bank’s deteriorating financial health for the decision. However, there was soon panic amongst the account holders as RBI placed a cap on withdrawals at Rs 50, 000.

Back in 2015, global financial firm- UBS- raised the first red flag in a report. The report stated that Yes Bank has loaned more than its net worth to companies that are unable to make payment. Ignoring the red flags, the bank continued business, as usual, quickly becoming fifth-largest private sector lender.

The bank issued more than 25% of the loans to non-banking financial companies, real estate, and construction. This resulted in a build-up of toxic assets. Despite previous warnings from RBI, the bank continues its modus operandi. With the falling of the bank’s share prices, investors pulled out Rs. 18, 000 crores between Apr-Sept 2019.

As per its Yes Bank revival plan, the RBI has allowed 49% stake to be acquired by SBI. Yes Bank founder, Rana Kapoor, is under ED custody and the matter is more likely to be resolved in a court.

Indian Prime Minister Narendra Modi called India to be “Atmanirbhar” or “self-reliant” on 12th May 2020. This data is enough to support the claim of the Prime Minister kickstarting the program. While leaders claim that the government has started reinforcing the idea of a self-reliant India speedily by implementing many of the measures, there is still no visible impact on the economy.

While the plan may sound robust, the finer details of the execution still need sorting out.  As per the scheme, the government has already distributed credits worth Rs. 1.10 lakh crore to Micro, Small and Medium Enterprises. These industries were primarily affected by the pandemic and shutdown. However, there remains a major chunk of the industry waiting for revival. Same is the case with other measures announced under the scheme.

As the Coronavirus confines people to their houses, netizens are welcoming online solutions to so-called physical problems. Legal matters, traditionally associated with office visits and physical meets, are sorted out online. People under any kind of legal distress are looking for options to gain legal consultation instantly. Most of them are seeking legal advice related to divorce, property disputes, and financial issues. Taking advantage of the situation, local legal-tech start-ups have started to offer online consultation with a minimal cost.

Similarly, lawyers wary of physical proximities are looking for ways to take their practice online with the help of established software. With regular judiciary services under strain, legal tech might just be the answer to the current problem.