Triple Talaq is a form of divorce practiced in India, whereby a Muslim man can legally divorce his wife by pronouncing talaq three times. The pronouncement can be oral or written, or, in recent times, delivered by electronic means such as telephone, SMS, email or social media. The man need not cite any cause for the divorce and the wife need not be present at the time of pronouncement. After a period of iddat (waiting), during which it is ascertained whether the wife is pregnant with a child, the divorce becomes irrevocable. In the recommended practice, a waiting period is required before each pronouncement of talaq, during which reconciliation is attempted. However, it has become common to make all three pronouncements in one sitting. While the practice is frowned upon, it is not prohibited. A divorced woman may not remarry her divorced husband unless she first marries another man. Until she remarries, she retains the custody of male toddlers and pre-pubertal female children. Beyond those restrictions, the children come under the guardianship of the father. 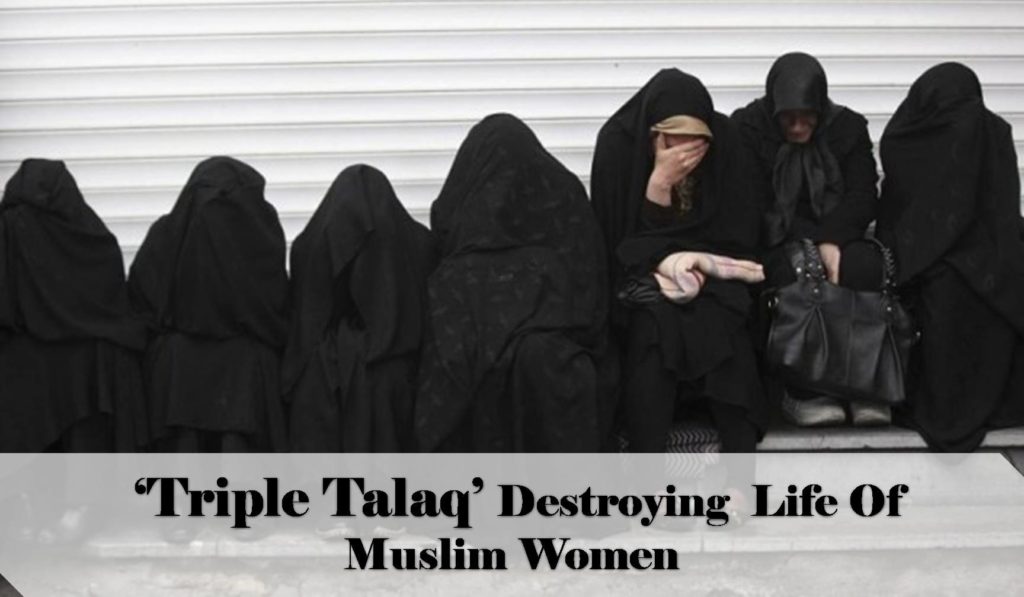 AMENDMENTS IN THE 1400-YEAR-OLD MUSLIM FAITH?

The Supreme Court began hearing arguments in Shayara Bano v. Union of India, which has popularly come to be known as the “triple talaq case”. This is a case, in which the constitutional validity of certain practices of Muslim personal law such as triple talaq, polygamy, and nikah halala has been challenged, has created political controversy across the spectrum. The All India Muslim Personal Law Board (AIMPLB) has warned secular authorities against interfering with religious law. On the other hand, Prime Minister Narendra Modi has lent his support to the Muslim women fighting against the practice of triple talaq.

Recently, the All India Muslim Personal Law Board (AIMPLB) told the Supreme Court that triple talaq was a matter of faith that was almost 1,400 years old, and asked who were we to say that it was un-Islamic.

“If I have faith that Lord Rama was born at Ayodhya, then it’s a matter of faith and there is no question of constitutional morality,” Senior Advocate Kapil Sibal, representing the AIMPLB, told a five-judge Constitution Bench headed by Chief Justice JS Khehar.

That bench, comprising Justices Anil R Dave and Adarsh Kumar Goel recommended that the law had since developed worldwide to recognize that gender injustice was a violation of the fundamental rights of women, noting the incremental changes towards this in Indian rulings over the years. Consequently, the triple talaq case figures in the court business list or the cause list in reference to Muslim women’s quest for equality. What’s been forgotten in the outcry over the plight of Muslim women abandoned by way of instant triple talaq is that the reference was in-house.

The board would have the court believe that this was supposed to be a warning to husbands not to pronounce talaq a third time lightly, but the naysayers say that it has boomeranged. Instead of protecting women, it has only helped the patriarchal system exploit women even further.

The Supreme Court on Thursday reserved its verdict on a batch of petitions challenging the constitutional validity of triple talaq after hearing the matter for six days from May 11.

A five-judge constitution bench headed by Chief Justice JS Khehar heard the issue for six days during which various parties, including the central government, the All India Muslim Personal Law Board, All India Muslim Women Personal Law Board, made their submissions. The bench, also comprising justices Kurian Joseph, RF Nariman, UU Lalit, and Abdul Nazeer, had begun the historic hearing on 11 May.

It had fixed a six-day schedule for hearing, in which three days were available for those challenging triple talaq and three days for those defending it. On Wednesday, the Centre told the Supreme Court that triple talaq was not integral to Islam, but was a gender issue within the Muslim community.

There is no doubt that triple talaq violates women’s rights to equality and freedom, including freedom within the marriage, and should be invalidated by the Supreme Court. The larger question, however, is whether the court will stick to its old, narrow, colonial-influenced jurisprudence, and strike down triple talaq while nonetheless upholding a body of law that answers not the Constitution, but to dominant and powerful voices within separate communities; or will it, in 2017, change course, and hold that nobody of law (or rather, nobody of prescriptions that carries all the badges and incidents of law) can claim a higher source of authority than the Constitution of India.

What are the biggest challenges facing corporate law firms today?