The Constitution of India has two kinds of rights – Fundamental Rights and Constitutional Rights.

The fundamental rights are the basic and inalienable rights granted to each citizen of India through Part III of the constitution, and in some cases to non-citizens too.

These rights are enshrined in Part III of the Constitution of India and are 6 in number.

c) Right against Exploitation – Article 23 and 24. 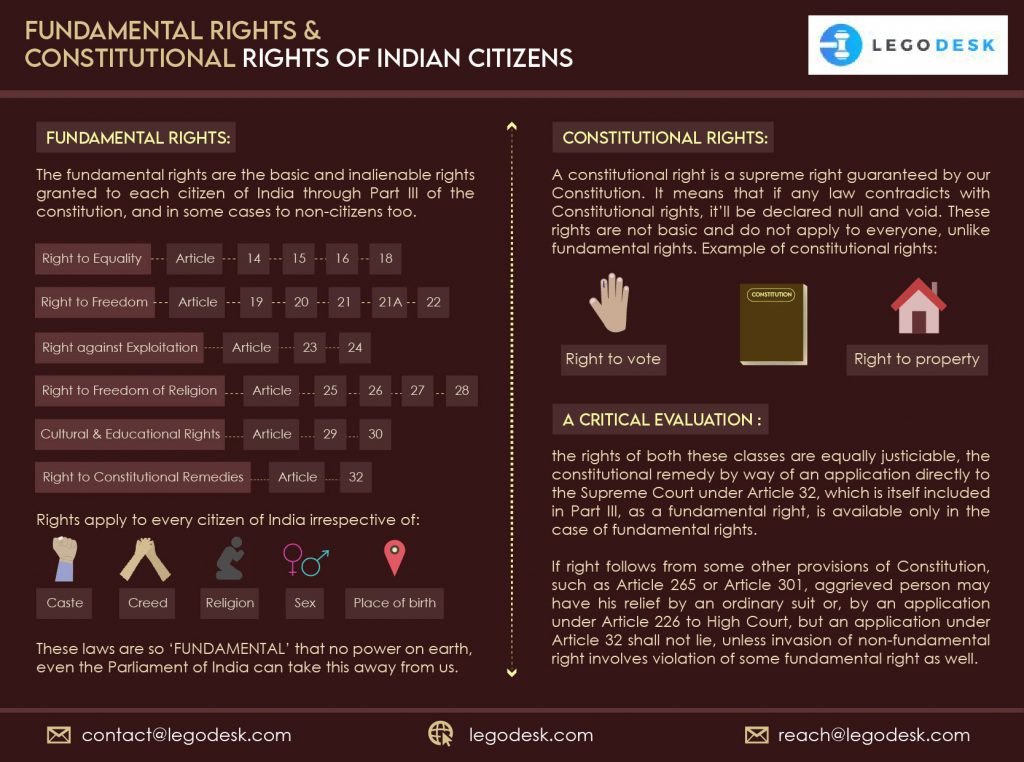 These fundamental rights apply to every citizen of India irrespective of their caste, creed, religion, sex or place of birth. These rights, if infringed are enforceable and justiciable in the High Courts under Article 226 of the Constitution of India and in the Supreme Court under Article 32 of the Constitution of India. Article 32 is itself a fundamental right. The enforcement of these rights can be done via writs namely – Habeas corpus, Mandamus, Quo Warranto, Certiorari, and Prohibition. These rights come with reasonable restrictions and hence are not absolute in nature. They are enforceable only against the State of India and not against private individuals, except for Article 17 which abolishes untouchability. Article 17 is enforceable against private individuals too.

These laws are so ‘FUNDAMENTAL’ that no power on earth, even the Parliament of India can take this away from us.

All rights that have been conferred to the citizens and enshrined in the Constitution of India but are not under the domain of Part III of the Constitution are said to be Constitutional Rights. A constitutional right is a supreme right guaranteed by our Constitution. It means that if any law contradicts with Constitutional rights, it’ll be declared null and void. These rights are not basic and do not apply to everyone, unlike fundamental rights. For example, Right to vote or universal adult suffrage is guaranteed in our Constitution under Article 326. However, a citizen of India has to attain a majority, that is the age of 18 before he/she is eligible to vote. Constitutional rights can be created and can be interpreted by law from case to case basis. These rights can be a prerogative or a duty, it can also be a restraint of some power which is recognized and established by a Sovereign State or a Union of States such as India.

For example, Right to property which is covered under Article 300A of the Constitution of India can be taken away from the citizens by the “authority of law”. This means that when the legislators sign an act that takes away the right to property of a citizen, it will be held legally valid. This would not have been possible earlier because Right to Property was a Fundamental Right.

Limitations upon the State are imposed by other provisions of the Constitution and these limitations give rise to corresponding rights to the individual to enforce them in the court of law if the Executive or the Legislature violates any of them. Thus, Article 265 says that “no tax shall be levied or collected except by authority of law.” This provision confers a right upon an individual not to be subjected to arbitrary taxation by the Executive, and if the Executive seeks to levy a tax without legislative sanction, the aggrieved individual may have his remedy from the court of law. Tax illegally levied must be refunded since its retention may offend article 265 of the Constitution. The new provision in Article 300A belongs to this category. Similarly, Article 301 says that “subject to the provisions of this Part, trade, commerce and intercourse throughout the territory of India shall be free.” If the Legislature or the Executive impose any restriction upon the freedom of trade or intercourse which is not justified by other provisions of Part XIII of the Constitution, the individual who is affected by such restriction may challenge the action by appropriate legal proceedings.

What is then, the actual difference between these two rights?

Hi! I am Mayank Barman and I'm a student of Department of Law, University of Calcutta. I'm extremely passionate about the law and I love to read, write and research. I strive for novelty and new experiences and perceive new ideologies.

Contempt of Court in India