Today, when we look at the judiciary of India, it is very well organized and systematic. As the saying goes Rome wasn’t built in a day; in the same way, the present Indian Judiciary was not a sudden creation. 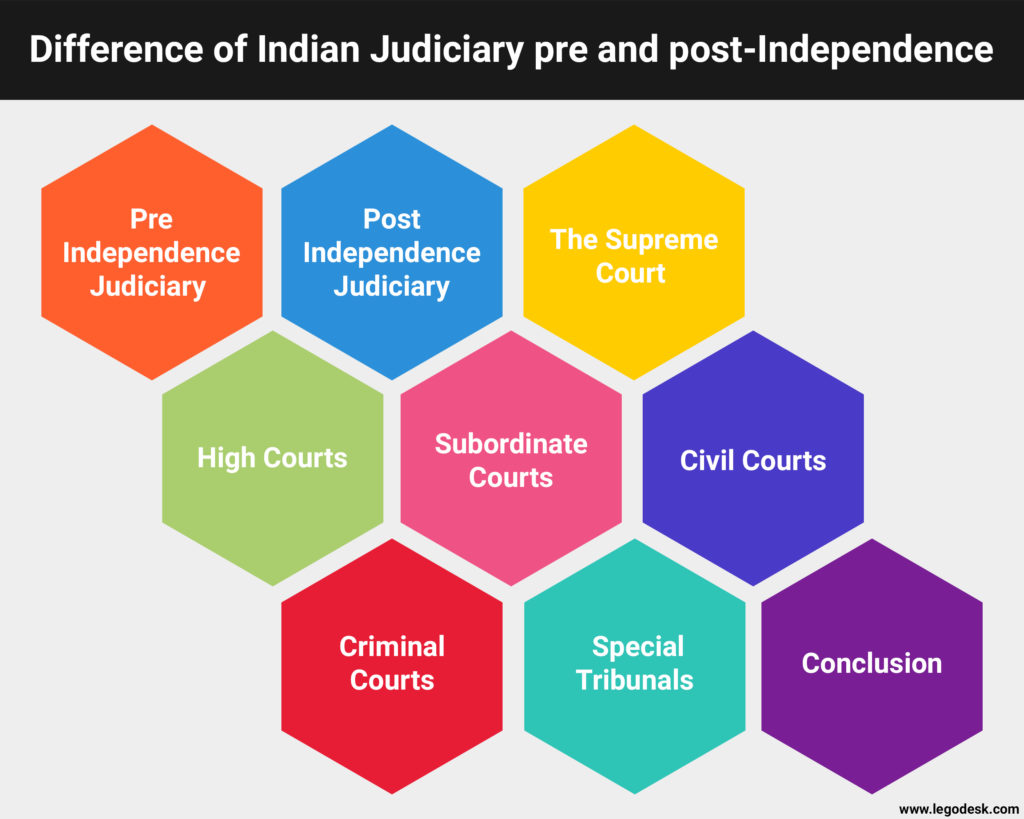 The credits of the formation and relevance of laws dating back to ancient India when Kautilya wrote Arthshastra around 300BC. Manusmriti was compiled between 200BC and AD100. Thus the various sources of law relied upon by kings at that time were shrutis, smritis, puranas, dharma sutras, etc. And the study of these memorable books is evidence that in ancient India we had a well-developed and sophisticated system of administration of justice. Sir William Jones, who came to India in 1774 as one of the first judges of the Supreme Court of Judicature of Bengal, learned Sanskrit and undertook an authoritative translation of Manusmriti.

The king was entrusted with the supreme authority of the administration of justice. His palace court was the highest court of appeal, as well as the original court in cases of vital importance. He was assisted by a chief justice, and a host of other judges.

Read Also: Judiciary in India – What are its Key Functions?

The British exploited India’s traditional judicial systems to their own advantage for some time. A need was arisen for dispensing civil as well as criminal matters. And so subsequently in 1772, a civil court  (Diwani Adalat) and a criminal court (Faujdari Adalat) in every district by Warren Hastings. The civil court was presided over by a collector, who administered justice with the help of Indian subordinates. An Indian officer presided over the criminal court; Qazis (judges) and muftis (theologians) assisted him. Although there was a fine system of Judiciary, there was no uniformity in the law. The personal laws were applied in civil courts and Muslim law was applied in criminal cases. For a while, the judges of the Supreme Court, established in 1774, tried to uniformly apply English law. However, this move was opposed bitterly by Indians. Thus the Act of 1781 restricted the application of English law to Englishmen in India only. But then there was an urgent need for having definite codes that were applicable to all Indian people.  And it is here that Lord Cornwallis is credited with two things: one is he took the initiative in applying British laws in India, stating the equality for all before law and second he is the one who introduced a secular judicial system in India. The Cornwallis Code, or Bengal Regulations, bound the courts to make decisions on the rights of persons and the property of the Indians according to the provisions of the regulations. To a great extent, the regulations accommodated the personal laws of Hindus and Muslims, stating them in clear terms. Thus, this was a landmark in the history of India’s modern judicial system that the administration of justice was not based on vague customs but was based on written laws and regulations.

As one person could not control the judiciary as well as the executive honestly efficiently, both these wings need to be separated. Cornwallis had his hands behind this. To make the judicial system more effective, provincial circuit criminal courts were established. Provincial civil courts were initially established at Dhaka, Murshidabad, Kolkata, and Patna. Both district-level courts were presided over by English judges. Mun-sif courts (local courts that dealt with civil matters) and registrar’s courts (local courts that dealt with the purchase and sale of land) were introduced with Indians at their head. Sadr Diwani (an apex court that dealt with civil matters) and Sadar Nizamat courts (the highest criminal court) were the highest courts in Kolkata, and the governor-general was to preside over both. Capital punishment could be awarded only by the Sadr Nizamat court, just as the King’s court, or Privy Council, in England was the highest court of appeal.

Governor-General William Bentinck abolished circuit courts. In 1833 an Indian Law Commission was appointed under T. B. Macaulay to codify the Indian system of law and court procedures. It was only after 1833 that courts were replaced by legislatures as the makers of law by Charter Act 1833, and the legal system in India, as we know it took shape and form.

The year 1861 marks a landmark in the process of development of legal and judicial institutions in India. The Indian Penal Code was introduced in 1861.  The British Parliament passed the Indian High Courts Act in 1861(an act of the U K Parliament), after which a number of High Courts were established in provinces. There was an amalgamation of the disparate and distinct judicial systems, the Company’s courts in the Provinces of Bengal, Bombay Madras and the three Supreme Court ( established by Royal Charter) in the Presidency town into the High Courts at Calcutta, Madras, and Bombay; thus representing a better instrument of Justice.   The High Court enjoyed the same power over all persons and estate. The Criminal Procedure Code was promulgated in 1872.

The Federal Court of India was established under the Government of India Act of 1935. This court was inaugurated in New Delhi on 1 October 1937. It was given all three kinds of jurisdiction: original, appellate, and advisory. The Privy Council was the highest appellate authority for British India, for matters arising out of the ordinary law.  But appeals from the High Courts in constitutional matters lay to the Federal Court and then to the Privy Council.

Presently the  Courts in Indian legal system, broadly consist of

1) The  Supreme Court at its top

2) The High Courts in the middle

3) The Subordinate Courts at the bottom

1. The Supreme Court in India

In each district, there is a District Judge, with a number of Additional District Judges attached to the Court. Below that Court is Courts of Judges. These Courts are created under State Laws.

Criminal Courts in India primarily consist of the Magistrate and the Courts of Session. Magistrates have been divided into Judicial and Executive Magistrates. The Court of Session can try all offenses and has the power to award any sentence, prescribed by law for the offenses, but a sentence of death requires confirmation of the High Court.

Besides the Court, which forms part of the general judicial set up, there are hosts of specialized Tribunals dealing with Direct Taxes, labor, copyrighted. For the trial of cases of corruption, there are special Judges appointed under the Criminal Law Amendment Act, 1952.

A peculiar feature of the legal development in India was that for long the government endeavored to create a system of courts without ever attempting to develop a body of law. Conscious efforts to remove these defects were made by developing a coherent body of law. The independence of the judiciary is fairly well assured by the constitution itself and adequate precautions have been taken to help the judiciary to discharge their functions effectively.

8 Tips on Starting Your Own Law Firm

What Do You Mean By Proclaimed Offender?