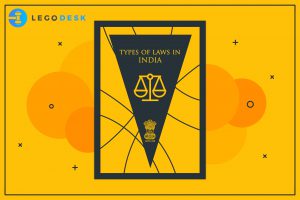 The term “law” has been explained by many jurists. Philosopher Austin defines the term law as “the command of the sovereign”. Holland, on the other hand, has explained it as “a general rule of behaviour enforced by sovereign political authority.” So, in simple terms, the law is a general and definite rule of behaviour of humans which is backed and enforced by the power of the State.

The law of a country is based on the Latin maxim “ubi jus ibi remedium” which means if there is a right, there is a remedy. In other words, the maxim states that there can be no right without a remedy and that remedy is provided in the form of different kinds of laws. Therefore, various laws are introduced by the legislature as a remedy to enforce and protect certain rights.

There are various kinds of laws in India. These laws are interconnected with each other and form a hybrid legal system. Indian legal system consists of civil law, common law, criminal law along with customary or religious laws regulating personal laws of followers of each religion. However, laws in India can be broadly categorized into four categories:

Common Law originated in England and came to India when East India Company came to the country. As the name suggests, it is common to all. The Common Law is also known as judicial precedent or judge-made law or case law. So, it is a body of law that derives its origin from judicial decisions of the cases decided by the courts. In the UK, when a case was brought up in the court of law and the decision was given by the judge then that decision was taken as a precedent for future cases.

In India, the law compiled in various codes like the Indian Penal Code, 1860, Indian Evidence Act, 1872, the Code of Criminal Procedure, 1973 and the Code of Civil Procedure, 1908 were primarily derived from the Common Law principles. Further, Article 141 of the Constitution of India states that “the law declared by the Supreme Court shall be binding on all courts within the territory of India.” Hence, it can be said that the Indian legal system has a wide application of Common Law.

Criminal law is a body of rules that defines various acts prohibited by the State because they harm and threaten public safety, called “offences” and provides punishment for committing such offences. These acts are considered as offences against society as a whole and not just an individual.

Criminal law is different from civil law; as the civil law emphasizes more on dispute resolution than punishment. Civil law is applicable for wrongs against an individual and not against the society or state. The standard that must be met in criminal proceedings is “beyond a reasonable doubt”, unlike civil proceedings that are based on “preponderance of probability.”

In India, Criminal law is basically dealt by, the Indian Penal Code, 1860; Code of Criminal Procedure, 1973; and the Indian Evidence Act, 1872. The Indian Penal Code, 1860, defines various kinds of offences and provides punishments for them. Code of Criminal Procedure, 1973, on the other hand, provides the procedure through which the criminal laws are needed to be enforced and the general procedure for the investigation of the crime. The Indian Evidence Act, 1872 lays down rules regarding the admissibility of different kinds of evidence in the court of law.

Civil Law consists of a body of rules which provides procedures, and judicial precedents to help in resolving the various non-criminal disputes. These disputes are either between individuals or organizations. The main object of Civil Law is to resolve disputes and disagreements between individuals by providing compensation to the aggrieved. The Civil Procedure Code regulates the functioning of civil courts and provides the procedure for civil laws to be enforced.

Civil law is different from criminal law; as civil law emphasizes more on dispute resolution than punishment. Civil law is applicable for wrongs against individuals, unlike criminal law which deals with wrongs committed against the state or society as a whole. The standard that must be met in civil proceedings is “preponderance of probability” unlike criminal proceedings that are based on “beyond reasonable doubt.”

Read in detail – Understanding the Civil Laws in India

Civil law can be further subdivided into four categories:

Statutory law is also known as legislative law or national law or municipal law.  It is made by the government (national and state legislature) to regulate the conduct of its people. Legislation can make law on its own to counter any present or future problems. The legislation does not need any case to be brought in the court of law to make a law and set precedent.

The statutory law comes into existence by codification and a process is followed for it to become a law. First, it is proposed as a bill in the legislation, which then, if passed, gets signed by the executive (governor in the case of state and president in the case of the country) and becomes an Act. For example the Information Technology Act, 2000, Motor Vehicles Act, 1988 etc.

Statutory Law is opposite to Common Law as the later is based on judicial precedents whereas the earlier is made and enacted to counter present or future problems irrespective of any precedent or case laws.

In India, various kinds of laws are applied to regulate and determine the behaviour of citizens. These laws are made to maintain society and counter any problems which people may face, Different kinds of laws address and counter different problems according to their applicability.

Common-Law was the first law introduced in India by the Britishers after the invasion of the East India Company. This law mainly gives utmost authority to judicial precedents and case laws. India also implements common law in its legal system, as provided under Article 141 of the Constitution of India. Along with common law, statutory law also developed in India with time and now it is the basic structure of the present legal system of India. Statutory law, unlike common law, gives power to the legislature to make laws and implement them according to the needs and demands of the society.

In addition to these two laws, criminal and civil laws are also applied to address different problems of society. Criminal law deals with society, offences and punishment, civil law, on the other hand, deals with individuals, disputes and redressal. Hence, in conclusion, it can be said that all these different kinds of laws are needed to counter different kinds of issues. All these four laws are like the pillars of a disciplined society and the absence of any one of these four laws will result in an imbalance in society.

by Shambhavi Tripathi • 3 years ago