What are the solutions to speed up the Indian judiciary?

What are the solutions to speed up the Indian judiciary?

As we all know that the Indian Constitution is made up of three pillars, the Legislative, the Executive, and the Judiciary. Among these three, the Indian Judiciary is considered one of the most powerful pillars as it is an autonomous body. This is because even the highest official of the country can be tried by the Indian Judicial system. But the problem is in spite of its overwhelming power, there are certain integral problems that the Indian Judiciary faces. For instance, the Indian judicial system is erratic, under-staffed and above all, it is extremely slow. One of the stalwart examples, of the judicial system being slow is that cases such as the 1984 Sikh riots are still waiting for a final verdict. In fact, a lot of them who were seeking justice have expired in these 32 long years. The situation is so bleak with the Indian judiciary that it has a backlog of as many as three crore cases. To be honest, the saying,

“Justice delayed is justice denied”, holds true for India.
Why is the Indian judiciary system slow?

If we get into a detailed analysis as to why the Indian judiciary is slow, it can be said that the problem lies at the grass-root level. To be honest, the levels of difficulty people face in getting their cases heard contribute largely to the overall chaos in the system. Right from the time that is taken to lodge an FIR to the time that is taken in the lower court, the High court or the Supreme Court is beyond imagination. There is too much of red-tapism that people face while dealing with legal issues.

Another important cause is the ratio of pending cases and legal professionals available. Right from the lower court up to the Supreme Court, there is a shortfall of judges as well as lawyers who will try the cases. The figures will actually tell you the story. There is one judge for around every, 73,000 people in India. This data is seven times worse than that of the U.S. A calculation made by Bloomberg Businessweek, says, “If the nation’s judges attacked their backlog nonstop—with no breaks for eating or sleeping—and closed 100 cases every hour, it would take more than 35 years to catch up”. Aren’t the numbers something to worry about? Hence, the steps need to be done to quicken the Indian judicial system.

The malice of corruption has penetrated deep into the system. With too much of corruption present in the legal profession, all the processes get slowed down. People need to wake up and come out of this corruption.
Besides the lack of workforce and corruption, the Indian judiciary is periled with a low allocation of resources. The amount of money that has been allocated to the  Judiciary of India of late, stands the lowest when compared to all the other countries across the globe. 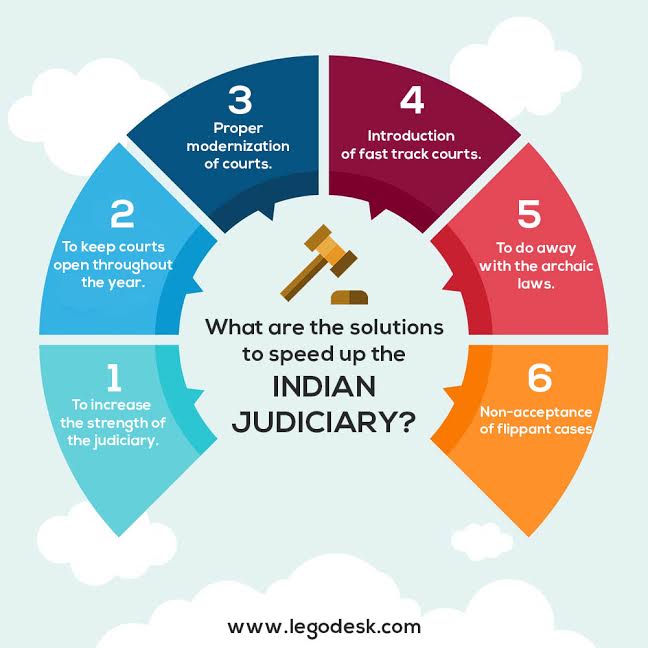 How to speed the Indian Judicial System?

It is high time that we come out of this dormant state and something effective is done to make the Indian judiciary speedy. This is important for the betterment of the community at large. Some of the things that could be done to quicken the legal proceedings are the following:

To increase the strength of the judiciary:

To keep courts open throughout the year:

Times have changed and today people are active round the clock. But the Indian judiciary still works in early fashion. They have summer vacations, winter vacations and a lot of other leaves. It is just not acceptable when we are carrying the baggage of three crore backlog cases. In fact, the special night shift magistrate needs to be implemented so that people need not wait till the courts open. The government needs to get it straight that the Indian Judicial system should get the status of emergency service.

Today India dreams of becoming a completely digitized country. In fact, we have been successful to a large extent. But strangely enough, the Indian judiciary is left behind. This should not be the scenario. The Indian law system should be completely digitized right from the beginning till the end. This will help in saving a lot of to and fro documentation time.

There are many cases that almost everyone knows will go through the session’s court, the lower court, the High court and finally the Supreme Court. So when the destination of the case is known, there is no need of wasting time by presenting the case in the sessions and the lower court. Rather, a fast track court needs to be introduced so that a case can be directly sent to the Supreme Court without wasting time.

To do away with the archaic laws:

Indian Judiciary had come into existence after India earned her independence in 1947. The laws were made as per the societal condition then. But in recent times, a lot of law has become redundant. Hence, it is time that the Indian Judicial system does away with the archaic laws and takes into consideration the present social condition before giving a judgment.

Many times it is seen that a powerful political figure gets any sort of case admitted in the court of law. The case may be dismissed at a later stage, but it wastes valuable time for the judiciary. Therefore, judges should have clear instructions about the kind of cases they can accept in the court of law.

Constitution of IndiaIndian judiciaryJudiciary of India

In India so many cases are filed to threaten the opposit party to get the payment from him by use the court’s delay. They want to revenge or robbery the opposit innocent. These cases are pending long time. So, the court must make penalty and imprisonment for these kind of accused. 90% of the cases are based on this type.
Our supreme court must take immediate step to implement for this revenge cases.

8 Tips on Starting Your Own Law Firm

What are the biggest challenges facing corporate law firms today?

Understanding Live-in Relationship And Its Concept