Section 307 of the Indian Penal Code deals with the offence of attempt to murder. Section 307 states that “Whoever does any act with such intention or knowledge, and under such circumstances that, if he by that act caused death, he would be guilty of murder, shall be punished with imprisonment of either description for a term which may extend to ten years, and shall also be liable to fine; and, if hurt is caused to any person by such act, the offender shall be liable either to imprisonment for life or to such punishment as is hereinbefore mentioned.
When any person offending under this section is under sentence of imprisonment for life, he may, if the hurt is caused, be punished with death. ” 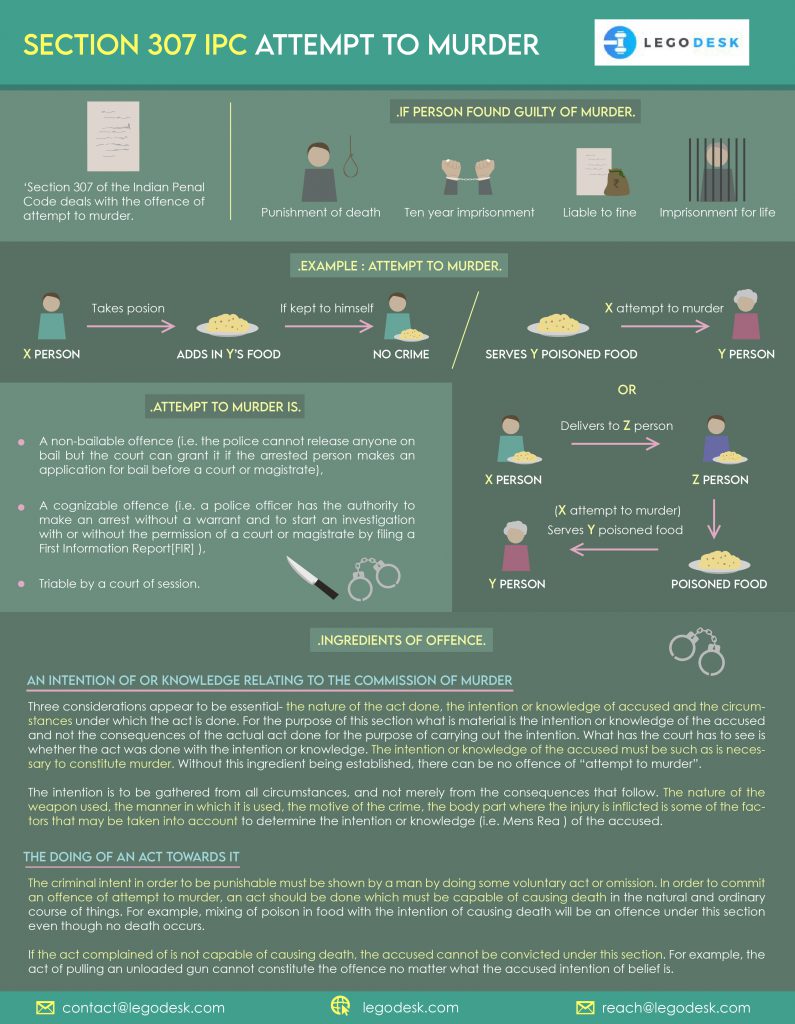 For example, X, intending to murder Y with poison, procures a white powder containing poison and secretly mixes the same with food which remains in X’s keeping. X has not yet committed the offence defined above. But if X places the same food on Y’s table or delivers it to Y’s servant to be placed on Y’s table, X has done an offence amounting to an attempt to murder.

Attempt to murder is

To constitute an offence under IPC section 307, two ingredients must be present:

(a) An intention of or knowledge relating to the commission of murder;

(b) The doing of an act towards it

The intention is to be gathered from all circumstances, and not merely from the consequences that follow. The nature of the weapon used, the manner in which it is used, the motive of the crime, the body part where the injury is inflicted is some of the factors that may be taken into account to determine the intention or knowledge (i.e. Mens Rea ) of the accused.

(b) The doing of an act towards it

Just wrong and evil intent is not enough to constitute a crime for you cannot know the intentions of a man. The criminal intent in order to be punishable must be shown by a man by doing some voluntary act or omission. In order to commit an offence of attempt to murder, an act should be done which must be capable of causing death in the natural and ordinary course of things. For example, mixing of poison in food with the intention of causing death will be an offence under this section even though no death occurs.

If the act complained of is not capable of causing death, the accused cannot be convicted under this section. For example, the act of pulling an unloaded gun cannot constitute the offence no matter what the accused intention of belief is.

In Vasan Jadhav vs. State of Maharashtra (2004), the Supreme Court observed that to justify a conviction under section 307 it is not essential that bodily injury capable of causing death should have been inflicted. Although the nature of injury actually caused may often give considerable assistance in coming to a finding as to the intention of the accused, such intention may also be deducted from other circumstances, and may even in some cases, be ascertained without any reference at all to actual wounds. What the court has to see is whether the act, irrespective of its result, was done with the intention or knowledge under circumstances mentioned in the section. If the intention is to commit murder and in pursuance of that intention a person does an act towards its commission irrespective of the fact that the act is penultimate or not, the offence under section 307, IPC would be made out. An attempt in order to be criminal need not be the penultimate act. It is sufficient in law if there is present an intent coupled with some act in execution thereof.

Thus, Attempt to murder is an offence punishable under section 307 of the Indian Penal Code, 1980.

All About Law of Limitation in India