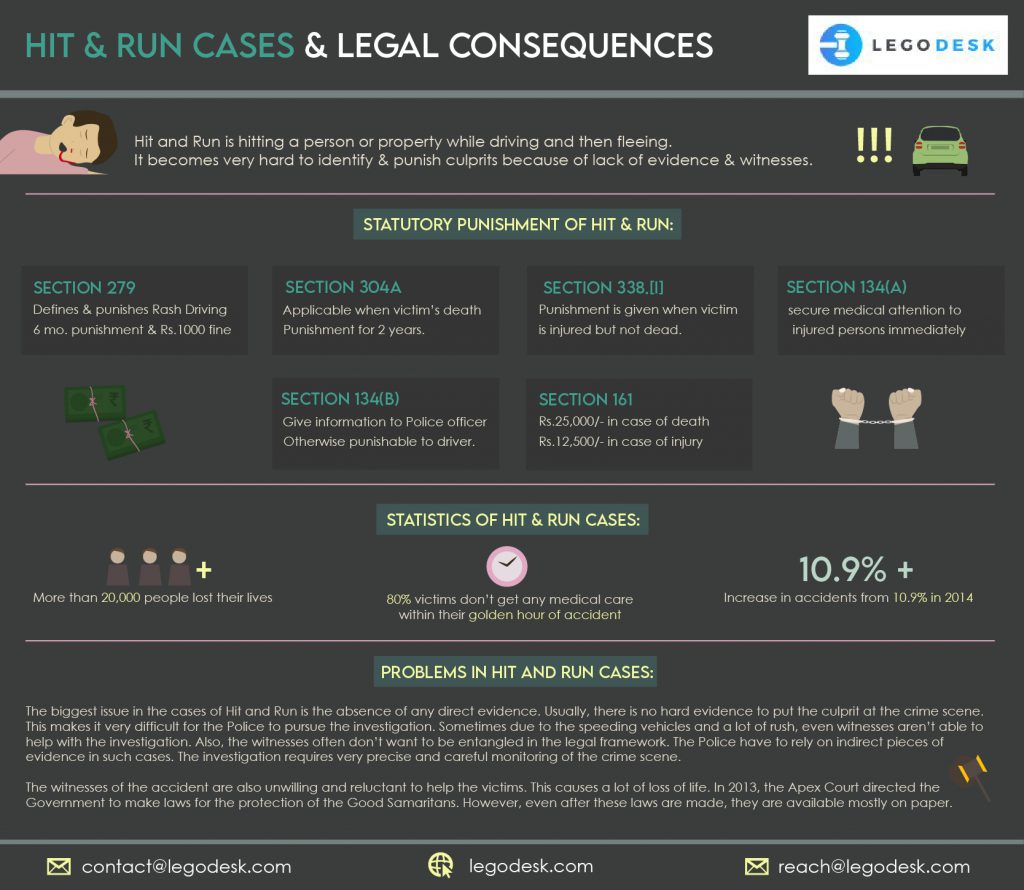 Introduction To Hit and Run Cases

Hit and Run cases happen when the drivers while driving incur damage to any person’s life, health or property while rash driving and thereafter failing to register their vehicle and driving license with the concerned legal authorities. In layman’s terms, Hit and Run is hitting a person or property while driving and then fleeing. It becomes very hard to identify and punish the culprits because of lack of evidence and witnesses. However, there have been many instances when the law has convicted them.

Statutory Punishment of Hit and Run

Hit and run cases are not specifically punishable under Indian Penal Code (IPC) as such. Though, Sections 279, 304A, and 338 of the IPC are applicable in the Hit and Run Cases. Section 279 defines and punishes Rash Driving. There is a punishment of jail term extending up to 6 months and a thousand rupees fine under this section. Also, Section 304A punishes death by negligence. This section is directly applicable to Hit and Run cases which result in the victim’s death. The punishment under the Section is for up to 2 years. In cases where the victim hasn’t died but is grievously injured, the punishment is given in Section 338.[i]

The Motor Vehicles Act, 1988 is applicable to the cases of Hit and Run too. Section 161 of the Act defines “hit and run” as “an accident arising out of the use of a motor vehicle or motor vehicles the identity whereof cannot be ascertained in spite of reasonable efforts for the purpose”. As can be observed by the official codified definition, a hit and run does not always pertain to murder or grievous hurt, but to accidents at large. Section 161 also provides for compensation to the victims of the hit and run; twenty-five thousand rupees in case of death and twelve thousand and five hundred rupees in case of grievous hurt.

Section 134(a) of the Act requires the driver to secure medical attention to the injured persons immediately. And section 134(b) requires them to give the information about and relevant to the same to a Police officer as soon as possible. Failing these two duties, the driver will be punishable.[ii]

Statistics of Hit and Run cases

More than 20000 people lost their lives in Hit and Run cases in India alone.[iii] Hit-and-run cases accounted for 11.4% of all accidents in 2015, an increase from 10.9% in 2014, according to road transport ministry data. In a survey, they found that about 74% of respondents expressed unwillingness to assist victims of road accidents. According to a study Impediments to Bystander Care in India conducted by SaveLIFE Foundation, advocacy working for road safety, and TNS India, a global marketing research company, in July 2013. The SaveLife-TNS study also points to another study by the Indian Journal of Surgery published in 2006. There, it was found that 80% of road accident victims do not receive any medical care within the first or golden hour after the accident.

Problems in Hit and Run cases

The biggest issue in the cases of Hit and Run is the absence of any direct evidence. Usually, there is no hard evidence to put the culprit at the crime scene. This makes it very difficult for the Police to pursue the investigation. Sometimes due to the speeding vehicles and a lot of rush, even witnesses aren’t able to help with the investigation. Also, the witnesses often don’t want to be entangled in the legal framework. The Police have to rely on indirect pieces of evidence in such cases. The investigation requires very precise and careful monitoring of the crime scene.

The witnesses of the accident are also unwilling and reluctant to help the victims. This causes a lot of loss of life. In 2013, the Apex Court directed the Government to make laws for the protection of the Good Samaritans. However, even after these laws are made, they are available mostly on paper. In some states like Karnataka however, these laws hold much importance.[iv]

Hit and Run cases have come to the knowledge of most of the Indians after the infamous Salman Khan case in 2002. He was accused of driving his car onto the Footpath into a group of homeless people. One of them had died. There have been many high profile cases of Hit and Run over the years. And, many which couldn’t get as much attention.

The usual reason found behind these instances is Rash driving, On-road racing and Drink and drive. The victims, either injured or dead are left to suffer while the culprits run free. Even the compensation given to the victim is too low as termed by the Apex Court. A bill is pending in the Parliament to increase the same from 25000 rupees to 2 lakhs.

All About Juvenile Justice

Article 47 of the Indian Constitution

Relationship Between Law and Liberty