The 2019-20 Interim Budget was presented by the Finance Minister of India, Mr. Piyush Goyal on February 1, 2019. This interim budget seeks to meet the expenditure for the first six fiscal months of 2019-20. It should be noted that an interim budget is also known as a ‘vote on account.’

The 7 Major Highlights of The budget 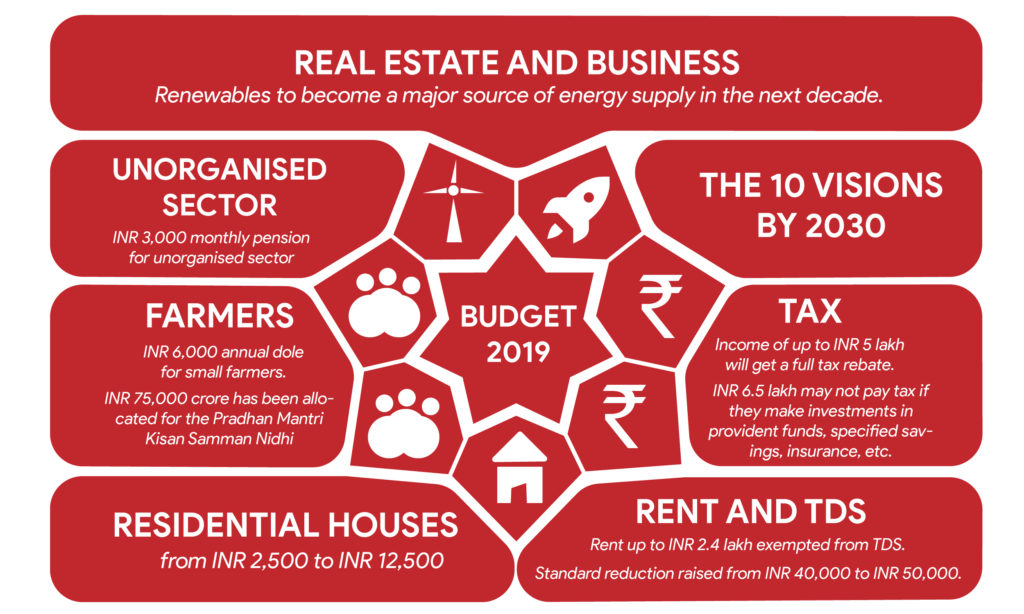 The salaried class has got some relief with the increase in the standard deduction. The threshold for tax deduction at source on the interest from fixed deposits with banks and post office deposits has been raised from INR 10,000 to INR 40,000.

Piyush Goyal offered direct cash support of INR 6,000 a year which is to be paid in three installments to small farmers with a landholding of up to 2 hectares to quell the growing farmer unrest over depressed rural incomes. He further said that the government would fork out INR 20,000 crore this financial year for the program, known as the Pradhan Mantri Kisan Samman Nidhi. The cost in a full year is estimated to be INR 75,000 crore.  12.56 crore farmers are likely to benefit from this scheme.

Goyal announced a monthly pension of INR 3,000 for unorganized workers aged above 60 that will cover migrant labor and household help. Under the contributory pension scheme, workers with a monthly income of less than INR 15,000 will have to contribute a small amount until they attain the age of 60. The government has set aside INR 500 crore for the scheme this year.

Here is the Detailed Overview Of Indian Penal Code